Meet Calvin. He is 7-years-old. He loves video games, is on the 2nd and 3rd grade basketball team, had a lot of snow days this year so far, loves playing outside with his little sister Rylee and he’s totally into knitting. Yes knitting.

There is a common misconception that knitting is “for girls”. It’s pretty funny that this is the assumption because knitting actually has a rich history full of men. (Bros & Rows: The Real History of Men Who Knit and The Ultra Manly History of Knitting are a good place to start if you want to know more about the history of men in knitting.)

I’m always excited when I see little kids knitting – or just making something with their small hands, big imaginations and inexhaustible tenacity. But the fact that Calvin is unknowingly breaking stereotypes is even better. Not to mention, he gets his basketball team in on the action!

Calvin’s mom, Nicole, is friend of mine and I just had to know: What is he making? How did he get the team involved? Are the other parents making a fuss about their boys doing something “girly”? Nicole humored me with a little Q&A.

Purl You Crazy: I love that Calvin is knitting! What prompted him to start?

Nicole: His sister got a hat loom kit for Christmas and she put it in the bottom of her closet and had not looked at it since then. Calvin was looking for things in her closet and found it and instantly wanted to make the hat. So I showed him how to get it started and off he went and he LOVED it! After he finished his first hat he said “Mom I have a new hobby. No video games for me.” I highly doubt that, but I love that he found a new hobby that he can enjoy.

Nicole: I think when it is their idea to start a hobby, sport, musical instrument, or whatever it may be they are more invested in it and excited about it. Which makes that “thing” stick longer and more fun for them.

Nicole: Yes he is very interested in sell his hats. Right after he made his first one he said, “I think I could sell these.” Then he made up a plan that he was going to set up a stand in front of his grandma’s house and sell them. I told him we may have to wait until it’s a little warmer out.

PYC: What does he want to knit next?

Nicole: He is working on finishing a hat for himself now and because of posting the picture on Facebook we connected with another little boy named AJ who knits scarves. He is going to make a video and send it to Calvin showing him how to knit scarfs. He is pretty excited to make a matching scarf for him and his sister.

PYC: So was this hat on the loom the first thing that Calvin ever knitted?

Nicole: Yes. He made his first hat for his sister, Rylee.

PYC: I love that he got the basketball team involved in making the hat. Have you or he gotten any push back or criticism?

Nicole: The only “push back” would be that everyone giggles a little when I have said he is making hats. I think knitting is thought of as a girl thing to do, hence his sister getting it for Christmas and it being all pink things that came with it (which she loved she is a pinkaholic). Everyone is supportive though and think it’s very cool.

Nicole: I would have to say I think the best part of his new hobby is how confident, excited and proud he feels about it. I really feel like having little things that make a child feel special or different are great for helping them build You-niqueness!

Calvin, I hope you continue to build your You-niqueness around knitting. I’d share a craft market space with you any day!

This site uses Akismet to reduce spam. Learn how your comment data is processed. 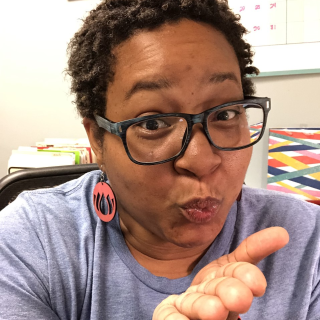 Owner of Purl You Crazy, a small business specializing in fun and whimsical fiber art creations.